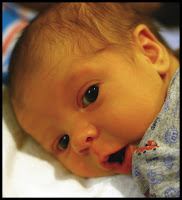 If you haven't heard, our baby boy made his early debut on Saturday, 01/03/09. Carter weighed 7lbs and 6 oz and was 20" long. He's actually 19.25" long, but who's counting? Perfect is perfect. Because he was breech, we had a c-section scheduled for 01/13, but he had other plans since my water broke Saturday morning about 8am and he was delivered (via c-section) at 11:28am. I guess the doctor on call had plans for the day because no one wasted any time (which I appreciated). I was having mild contractions by the time we arrived at the hospital, but nothing too painful. I never knew how a person could fall so completely in love with a tiny little creature in a split second, but that's exactly what happened the moment I heard his first cry. Sight unseen, I knew we'd made perfection. As for his head, it was 14.5" around which elicited a "WOW!" from my doctor when she came to see us on Monday. She was out of town (on a cruise) for the delivery. Of course, he looks nothing like Cartman (from Southpark) or Hoss Cartright (Bonanza).

We were released to come home on Monday and have been on a whirlwind ride ever since. When we left the hospital, his weight was 6lbs 14 oz, but no one was concerned since some weight loss is normal. By Tuesday at the pediatrician visit, he weighed 6lbs 9oz which was past our allotted loss of 10% of his birth weight. I'm nursing, but my milk had just started to come in yesterday, so we had a visit with an awesome lactation consultant and received some formula to supplement with at every other feeding. Needless to say, I was NOT happy about the formula since I had grand plans of exclusively breastfeeding (Since I'm built for it!). The nurse showed us how to "finger feed" which means Carter sucks on our pinky finger while we squirt formula into his mouth via a syringe. Therefore, he's sucking and getting milk all at the same time with no confusion-- other than how Dad's finger makes milk.... ;-) So far it's working great. We go back for a weight check this afternoon, so we're praying he's gained something. We're feeding every two hours and supplementing with formula (on top of breastmilk) at every other feeding. I'm sure this is way more information than anyone cares about, but I'm pretty impressed with how we're doing.

Also at our visit yesterday, the doctor checked his bilirubin levels for jaundice. He called mid-afternoon to let us know that his levels were too high for his comfort and that he would arrange for a "blanket" to be brought out to us. It kind of ticked me off because that was the first I'd heard that he could be jaundiced-- everything up until then was "within normal levels" and was nothing to worry about. So, we went from "normal" to jaundiced. We had the "blanket" delivered and promptly put poor Carter in the contraption. It's hardly a blanket and is more like a belt that wraps around his mid-section that emits UV light. We're "killing the bad billy's" no matter how uncomfortable it is. Clint and I took turns sleeping with him in the living room- either on the floor or in a chair-- which made for a long night. We survived though and are hopeful that we don't have many more days of this treatment. It's for the best though, I just feel so sorry for the poor little toot.

As for me, the recovery from the c-section has been fairly easy. Sure, I'm sore but nothing like I anticipated. I was up and walking the day after delivery and the nurses were astounded that I was standing up straight and getting around so well. I didn't realize there was another option. It's only gotten better. I can tell when it's time for more pain meds, but they're pretty low grade and just take the edge off the pain so I can get around easier. My staples are being removed this afternoon, so I'll no longer have a smiley face with braces in my lower abdomen!

All in all, it's been a tiring, awe inspiring few days. We're trying to catch naps here and there but there's just so much to do. It's hard to believe he's only four days old and already I can't remember life without him. I'll try to send pictures out regularly, so let me know if you get sick of seeing our kid. Oddly enough, we can't take our eyes off of him. I'm sure I'm leaving out important details, but this is the important stuff. Thank you for the calls, texts, good thoughts and prayers. Keep them up- we're total newbies at this parenting gig, after all!
Posted by Sara at 10:44 AM

I've been thinkin' about y'all! congratulations... he's just absolutely precious! Thank you for sharing him with us...

how could anyone get tired of seeing that precious little thing! can't wait for more pictures

I love Carter! He's gorgeous and I can't wait to meet him!!

He is 100% beautiful. You both are going to be wonderful parents. Congratulations!

YAY he's here! I can't wait to see your cute baby! Congrats! And I for one will never be tired of seeing pics of him!

oh my goodness, he is the cutest little thing! absolutely adorable. yall did good!

oh my! Just now seeing the picture, he is ADORABLE...what a beautiful newborn.

What a handsome little fella! Congrats to you both!

So glad to hear y'all are all doing great! What a precious blessing you have. Carter is just perfect! I can't wait for more pictures!! CONGRATS!

I can't wait to see more pictures of him!

Carter is precious! Congrats! I am glad that you are doing so well, and I am sure that the jaundice will clear up quickly. I am sure people have told you, but cherish these days with him. Before you know it, he will be a 2 year old head-butting you and giving you a black eye. :)

Sorry that was me...it posted twice for some reason!

Delurking to say Congratulations. He is precious and I cant wait to see more pictures. As a mother of a 15 year old, enjoy these days, you will remember every detail forever.

Congrats! He's a cutie!
Dan and I are so happy for ya'll!

Congrats Sara!! He is so adorable and I am so happy for yall!

Sara, you and Clint make beautiful babies!! He is too precious for words and y'all are gonna have little girls chasing him all over the place in a few years. I am beyond thrilled for you ~ you deserve every bit of this happiness and more. I need more pictures of him lol how could a person not want to stare at that handsome boy? Much love to all 3 of you!

I can't wait to meet Carter! I'm so happy for you both! Try and squeeze some sleep in. ;-)