I just read this and it cracked me up to the point that I had to challenge Google, as well.  I honestly never paid attention to their "suggestions" before, but now... lawsie mercy.

All I typed was the word "why": 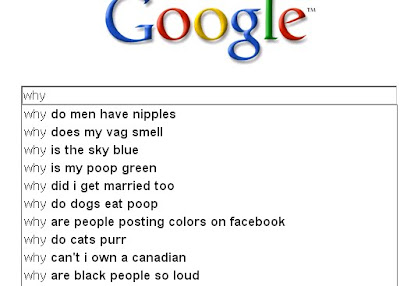 Email ThisBlogThis!Share to TwitterShare to FacebookShare to Pinterest
Labels: stupid

I remember the first day that C left Carter and I and went back to work.  It was after the hardest week of my life, daily hour-away doctor appointments and more tears and less sleep than I ever imagined possible.  Thinking back, I don't know how I lived through it, except maybe on sheer adreneline.  He was mine, all mine.  The responsibility of changing all diapers, of soothing all cries, of holding him through every single nap.  But, that's when I became a mother.

I don't find motherhood easy.  I think keeping Carter by myself is exhausting work.  C says it's "fun!" but I can count the hours he has had Carter by himself on one hand.  Now that he's crawling (no, not walking yet- don't judge!), it's even worse.  Just when I settle into my nest on the couch, it's back up to retrieve him from the kitchen or the dog bowl or the laundry room.  It's keeping a watchful eye on his every move and knowing that if he's quiet.... he's up to something.  It's spotting that mystery item he's just put in his mouth, it's closing doors so he can't go further, it's making sure there are no cords or plugs or other electrical things he can get to.  It's hearing him scream when I take one of these forbidden treasures away.  It's is he hungry or is he sleepy or did he just shit himself?  Even after he goes to bed, I've got my ever-trusty monitor inches from my ear listening, even while trying to relax.  A few days ago, while in the midst of double-ear-infection-hell, I didn't wake up all night.  I woke with a full bladder at 6am startled that I hadn't heard him cry all night.  Was that the case or did I SLEEP THROUGH IT?  Oh the guilt.

No, I don't feel better for confessing.  I feel guilty for complaining.  And it pisses me off when I read about how mothers should "let go of the guilt".  Frankly, I think that's a cop out.  Going to get a massage won't make me a better mom, I'll just be sore because I couldn't relax over the GUILT.


Now that I've derailed my well-intentioned post straight into a brick wall of GUILT, I'm going to go take a breath.  Don't get me wrong, being a mother is the most wonderful thing that has ever happened to me and I wouldn't change a single solitary second.  I cannot imagine a life without Carter- does one even exist?
Posted by Sara at 3:14 PM 6 comments:

I'm a frequent reader of I Heart Faces but have never participated in their weekly challenge.  Since this is their birthday week, what a better time to try my hand?  This week's theme is my "Best Face Photo".

Here's a recent picture of my little guy... before it got too cold to go pantless! 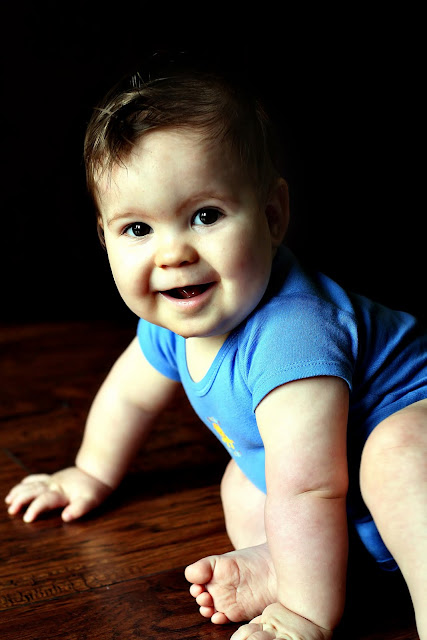