This probably doesn't apply to you

But you’re not the first you know, and you won’t be the last
There’s a long list of has-beens waiting down at the pass
And when you figure it out, that I’m not white trash
They won’t let you on the train that I’m on cause it’s moving too fast

Email ThisBlogThis!Share to TwitterShare to FacebookShare to Pinterest
Labels: rant

Let's do a good ol list, since it's been a while.

My life is boring and so is my blog. Seems I only write well when things aren't going so hot. I need to work on that, I reckon...

Initially, when I spoke with the lady who did my phone screen, I was told there was a tax position, an audit position and a "client services" (bookkeeping) position. The lady I spoke to used to be an auditor (on the client side, not what I do) in Dallas, so I was certain she could make the distinction between what I do and what she did.

I walked in and she told me I could be meeting with the Manager of the Client Services group. I knew immediately that I didn't have the education and/or qualifications he wanted. So, I played the game and answered his questions (no, no, no, no) and told him I wasn't what he needed. He agreed and I left. Another waste of an afternoon.

I got another call from some company in Houston who was interested in my soley because of my experience with a Big 4 firm. Ridiculous. Too bad I don't want to move to Houston or she probably would have made me an offer on the spot.

On the way home, I talked to C about the opportunities that were available for me out here. They're very limited, obviously, which is a HUGE frustration. But, "something will turn up". And, I believe that and I pray for it- for my own sanity.

So, thank you all for the well wishes. I'm sorry the update isn't more joyful, but at this moment I'm beat down. But, I have to keep reminding myself, I did get a promotion which is more than I had at the beginning of the week.
Posted by Sara at 11:25 AM 2 comments:

Announcement and an "Oh Shit!"

Remember I have an interview tomorrow in Tyler?

I JUST GOT A PROMOTION!

Granted, the money doesn't kick in til October, but SHIT! I seriously need to have a talk with my boss about working from home and coming in to the office one or two days a week. Somebody has a couch I can sleep on, right?

Oh, and I have to tell y'all because I can't tell anyone else because the announcement isn't til tomorrow and I won't be here. Go me!
Posted by Sara at 10:57 AM 10 comments:

Thanks to all the good thoughts, I have a job interview next Friday at 3:00 in Tyler. Yay me!
Posted by Sara at 6:51 PM 5 comments:


Proof that beer is bigger in (East) Texas: 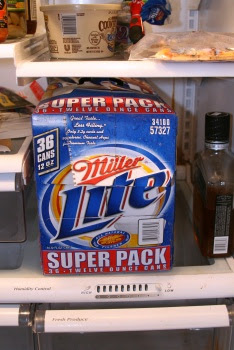 I love how some DVDs have an "alternate ending". You know, where's there's a little twist from the regular ending that may change the whole thing. I guess movie muckety mucks make those decisions, but I always enjoy watching it.

Sometimes in life, we plan our own alternate ending. Like when you know the job you have isn't your forever job and it's just tiding you over til you get married and stay home to be barefoot and pregnant. Or maybe you're planning to go back to school and do what you really want to do. Maybe the guy you're dating is just an in-between and you know he's just getting occupying your time til someone better comes along.

Then there there are times when you an alternate ending hasn't even crossed your mind. This is ALL you've ever wanted for as long as you've wanted and the thought of not having it blows your mind. That's kind of where I am at this moment. I don't know what tomorrow holds. I know what I want, but I don't know if that's the way it will turn out and the thought of that scares me to death. I don't have a plan b, no exit strategy, no alternate ending. I've put all my eggs in one basket- I'm all in. And if it fails, I'll be heartbroken and terribly lost. Every relationship is a gamble one way or another right?

If feeling secure is how a good one is supposed to feel, why do I feel like someone just pulled the rug out from underneath me?
Posted by Sara at 9:30 PM 7 comments: