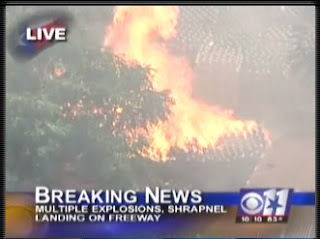 Goodness! Such excitement on a Wednesday morning. Hope you're safe and sound.
And it was updated: two serious injuries.

Sara, I pray for your safety and those around you today. What an interesting week you have had already!

Wow! I saw this on MSN at lunch today. Please post soon and let us know how you are fairing.

I took off early today too. You had a better excuse, though.